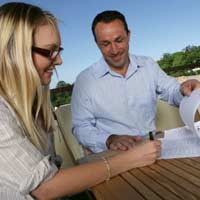 With almost four million people in the UK co-habiting it is important that some form of contract be set in place to protect the rights of those involved. Whether they are called Living Together Agreements or Co-habitation Contracts, documents that set out in writing the terms and conditions of any co-habitation are a wise move.

Many couples are well aware that common law marriage rights are a myth, although many more are not aware of this fact and have no idea of their non-existent rights. Contracts and co-habitation may not seem like the ideal starting point for two people who are intending to live together but there are sound advantages to having the terms and conditions of any co-habitation set down in writing.

At the moment the law does not legally recognise contracts that are drawn up by co-habiting partners. However, if any dispute does occur with regards to the property the co-habitation contract can be used as a point of reference by a judge. If the terms and conditions of the contract are clearly defined and have been agreed by both partners then the contract may have some bearing in a legal situation.

The Need for Co-Habitation Contracts

Many people live together without giving the necessary thought to financial details. In a perfect world, a romantic relationship would last forever, and the law has no business being involved in it. However, in the real world, finances are part and parcel of any co-habiting couple and if the end comes it is sometimes a case of every man for themselves, and that includes the financial side. Co-habitation contracts may be able to prevent one person walking away with everything while the other is left absolutely nothing.

A co-habitation contract should be drawn up regardless of whether a couple are romantically involved or simply sharing a dwelling. If one person has signed a lease or their name is on a mortgage deed, the co-habiting person may have fewer rights even if they have been contributing financially. Co-habitation contracts should clearly define the exact nature of the co-habitation and this includes the financial aspects of the relationship.

In most cases, advice from a solicitor or legal expert is necessary when it comes to contracts and co-habitation, and it may be a necessity that a solicitor will be needed for each individual. Before obtaining legal advice much consideration will be needed between the individuals as to what exactly will be set into the contract. There should be a discussion over what the contract should cover, and both parties should be in total agreement over the terms and conditions of the contract.

Where relationships such as co-habitation are concerned there are no real set in stone terms and conditions for life’s changing events. Contracts should have review periods set in place in consideration of the different changes that can take place within a relationship. A five year gap is usually an ideal time to review a contract and decide whether any changes are needed.

At the moment the law is undergoing a review regarding co-habitation rights. But it is taking time for a decision to be made on the rights of those who are co-habiting as opposed to those who are actually married. Contracts and co-habitation may not have the same ring to it as love and marriage, but people who are co-habiting do need to protect their rights, and a contract may be one step closer to ensuring that protection does exist.