Home > Understanding Contracts > Questionnaire: What To Do When a Contract is Breached? 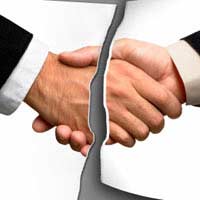 People enter into contractual situations with the best of intentions but for all manner of reasons the terms of the contract can be broken. A breach of contract can be major, minor, intentional, accidental, capable or incapable of remedy. Contract terms can be broken as a result of an event or occurrence that was outside both parties’ control. So what happens when a contract is breached?

Is the Contract Verbal or Written Down?

If the contract is verbal, you should write to the breaching party informing them of the fact that they have breached the contract and stating the timescale within which you would like the breach put right.

If the Contract is in Writing, Does it Specify What to do in the Event of a Breach?

Is There a ‘Notices’ Section in the Contract?

What is the Nature of the Breach?

Depending on the nature of the breach of contract, it may be that the contract will simply be allowed to continue as usual. For example, if you have a contract with a broadband service provider and your service is interrupted for a few days, there is likely already to be a provision in the service agreement that allows for service interruptions which means that this will not make the contract void.

Are You Asking for Damages?

In some situations it will merely be a matter of notifying the breaching party who will then either admit or deny the breach. If the breach is admitted, damages may be payable to the aggrieved party. If the breach is denied, it may be appropriate to go to mediation or arbitration, if the issue cannot be settled amicably.

Was it the Other Party’s Fault?

Force Majeure is a contract law term that, simply put, provides a ‘get out clause’ for parties to a contract in the event that the contract is breached because of something out of their reasonable control. If this is a specific clause in the contract, then ‘force majeure’ will apply. In its most basic terms, force majeure seeks to exclude acts of terrorism, war, strikes, lockouts, floods, acts of God etc from being seen to be the fault of a party to a contract. Contracts sometimes contain a further clause that stipulates the timeframe within which one party should inform the other of the force majeure event, and the means by which they should do this. In the case of a genuine force majeure event, neither party will be liable for the failure of the other to perform under the contract.

If a contract does not contain a ‘force majeure’ clause, or if the contract is agreed orally, an event that is outside either party’s control may ‘frustrate’ the contract under the legal doctrine of ‘Frustration.’ Again, neither party will be liable for breaches which occur otherwise than within their reasonable control.