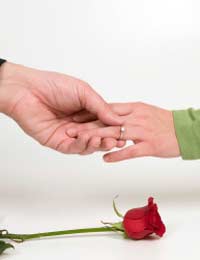 Becoming engaged to be married is similar to entering into a contract in as much as there is an offer and an acceptance. However, in the UK an engagement is not seen as legally binding as you cannot force someone to either stay engaged or proceed with a wedding ceremony.

Verbal contractual terms and conditions may apply within an engagement, and in the UK the engagement ring is usually seen as a sign of “sealing the deal”.

The Offer of Engagement

Traditionally, engagement contracts begin with the man offering a proposal of marriage, and if accepted by the woman then this will sometimes be known officially as betrothal. But with a multi-cultural society existing in Britain there are many different types of engagement traditions and rules. Many of these engagement traditions will be dependant on the rules governed by different religions.

In the past, betrothal was an official agreement to marriage and was a formal contract that was blessed either by a city official or a religious figure. Today, betrothal contracts and agreements are rarely used except in some Jewish or Arab cultures. In the UK the exchange of engagement rings is traditionally seen as the agreement of betrothal but again it is not a legally binding contract.

The acceptance of a proposal and the exchange of rings is seen as a promise to marry, and engagement rings are part and parcel of the “engagement contract”. The giving of engagement rings is thought to date back to the Roman era and the rings are regarded as a symbol of commitment between the two parties.

Refusal of the Ring

The offer of marriage can be rejected by the woman if she refuses to accept the engagement ring, or simply says no to the wedding proposal. In some countries an engagement ring is seen as a conditional gift and must be returned if the engagement is broken. There have been legal cases where men have actually sued their intended marriage partners when the ring was not returned after the engagement was broken.

The Banns of Marriage

Public announcements are another way of officially announcing engagement contracts. These can either be placed in newspapers or a simple engagement party can be held to announce the wedding plans. Announcements in church are known as the banns of marriage. Historically the banns were used as a way of not only announcing marriage intentions but of allowing any objections to be raised regarding the marriage plans.

In the strict legal sense of the word “contract”, engagement contracts are more a state of mind and are not legally binding contracts. They are a sign of intention, and an act of love and commitment towards two people. However, no part of the engagement agreement can be enforced by a court of law.

Contracts and Agreements Surrounding Divorce
Share Your Story, Join the Discussion or Seek Advice..
Can i sue him for breechbof promise, we dated for 8yrs, i proposed and he accepted, i bought him a ring...Later he proposed and also i accepted, now he has backed off
Ma eee - 9-Jan-20 @ 5:37 PM
any girl wants to contact marriages so call me at 9464284635
balli - 4-Feb-17 @ 3:20 PM
I want to engagement base any girl contect mee
raza - 1-Apr-16 @ 8:39 PM
Title:
(never shown)
Firstname:
(never shown)
Surname:
(never shown)
Email:
(never shown)
Nickname:
(shown)
Comment:
Validate: